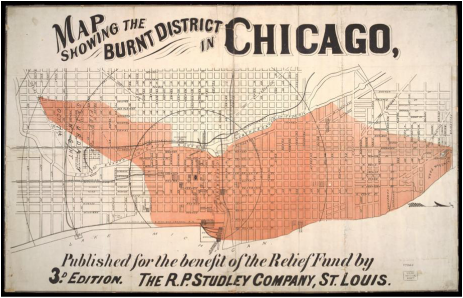 The history of National Fire Prevention Week has it roots in the Great Chicago Fire, which occurred on October 9, 1871. This tragic conflagration killed some 300 people, left 100,000 homeless and destroyed more than 17,000 structures. The origin of the fire has generated speculation since its occurrence, with the fact and fiction becoming blurred over the years. One popular legend has it that Mrs O'Leary was milking her cow when the animal kicked over a lamp, setting the O'Leary barn on fire and starting the spectacular blaze. How ever the massive fire began, it swiftly took its toll, burning more than 2000 acres in 27 hours. The city of Chicago quickly rebuilt, however, and within a couple of years residents began celebrating their successful restoration to memorialize the anniversary of the fire with festivities.

Intending to observe the fire's anniversary with a more serious commemoration, the Fire Marshals Association of North America (FMANA), the oldest membership section of the National Fire Protection Association (NFPA), decided that the 40th anniversary of the Great Chicago Fire should be observed not with festivities, but in a way that would keep the public informed about the importance of fire prevention.When President Calvin Coolidge proclaimed the first National Fire Prevention Week, October 4 - 10 1925, he noted that in the previous year some 15,000 lives were lost to fire in the United States. Calling the loss "startling", President Coolidge's proclamation stated, "This waste results from the conditions which justify a sense of shame and horror; for the greater part of it could and ought to be prevented... It is highly desirable that every effort be made to reform the conditions which have made possible so vast a destruction of the national wealth".NFPA continues today to make National Fire Prevention Week a priority and counts on the participation and efforts of tens of thousands of fire and safety professionals, emergency volunteers, and other individuals working to reduce the risk of fire and the toll it takes on our society.

The Alert Hose Company and the Adams Fire Department annually hold an open house in conjunction with National Fire Prevention Week.  Officers of the company visit the local schools during the week, giving fire safety demonstrations and inviting the children to attend the open house.  The event has grown each year and now is quite a community event.  Local businesses help each year, providing raffle items such as smoke detectors, fire extinguishers and the like, while others help with food or publicity.

BACK to the Public Education Main Page